The opportunity to navigate the highest lake in the world, ringed by the Andes’ incredible landscapes, and the promise of experiencing Lake Titicaca’s ancestral cultures was too tempting to let pass. I had a free weekend from the project with HOOP in Arequipa and I was determined to make the journey.

Lake Titicaca is not only the largest lake in South America by volume of water, but also, with an elevation of 12,507 ft, the highest navigable lake in the world. It is located in the Andes region in Peru, on the border with Bolivia.

Getting there from Arequipa was fairly easy: a 5–6 hour bus ride Friday night took me to Puno, a small port city, that serves as a point of departure for the expeditions around the lake. I was there Saturday morning all ready to embark, well, not that fast, as I quickly realized that I was starting to struggle with altitude sickness. The feeling of extreme fatigue and headaches remained with me all day long. By the second day I was almost acclimatized, but I definitely suffered in the beginning so I just tried to enjoy the scenery as much as I could but didn’t forced myself to do any extreme hikes and shooting.

I joined a group of about 12 and our guide in the port of Puno; minutes later, I was surrounded by the vastness of the lake. I headed to the open stern of the boat and stayed there enjoying the breeze, the view of the mountains, the deep blues of the sky reflecting on the waters and taking some photos until we reached our first stop of the day. 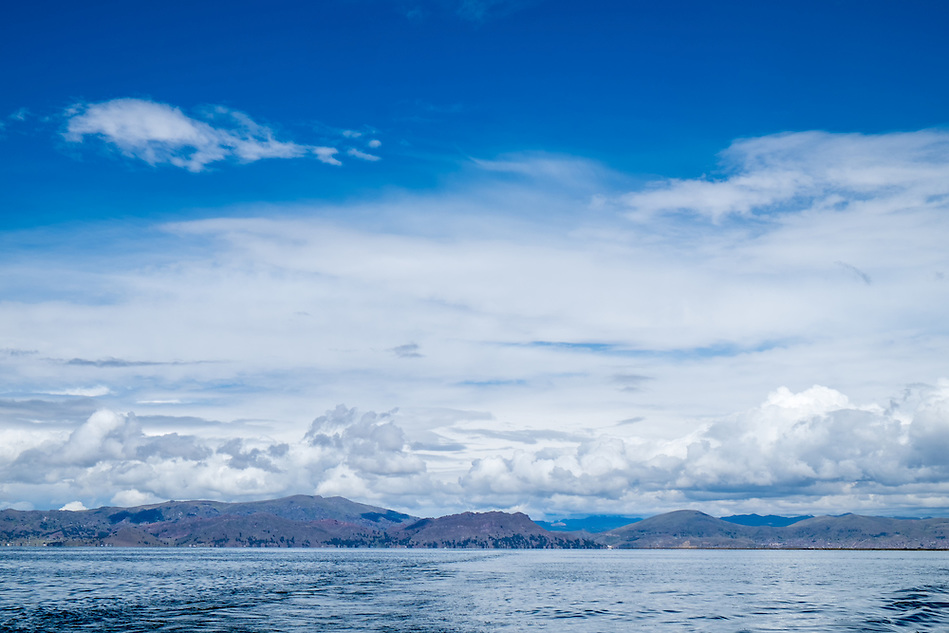 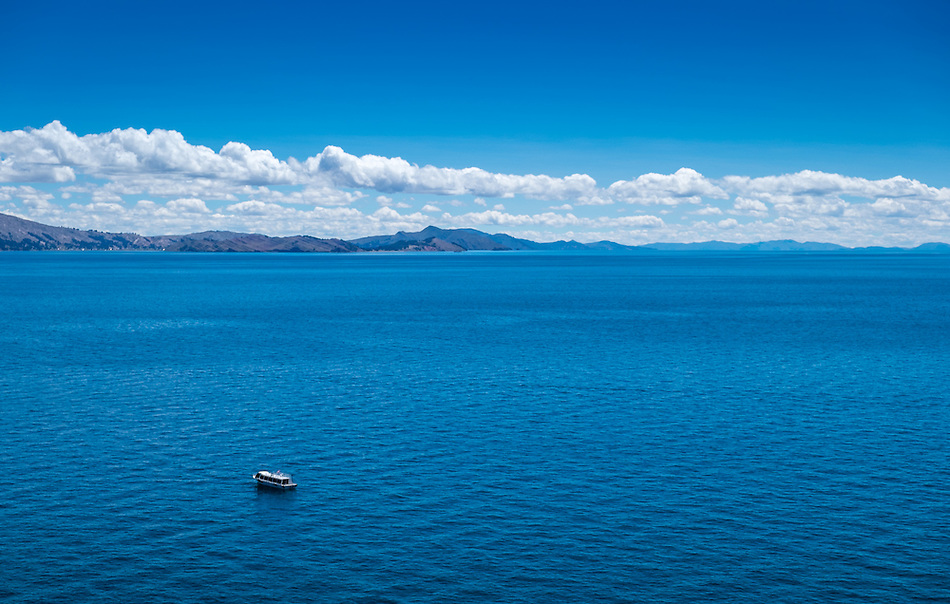 Centuries ago, in an effort to isolate themselves from other tribes, the Uros began their floating life. Today, about 300 families remain in about 40 islands or so. We were warmly welcomed. Although they still live in their traditional way, today one of the Uros’ principal activities is tourism. As our boat arrived, I jumped to a soft and springy island; that’s right, it felt like walking over sponge. These islands are built from nothing but totora reeds that grow in the lake; just layers upon layers of interwoven reeds anchored to the lake.

The traditional huts and canoes are also constructed from the reeds. I was told that, on average, an island can take around six months to construct and they generally last ten years. Some of them are now equipped with solar panels. After a short explanation on the local history and the Uros traditions, we got to take an outing in one of the canoes, then wandered freely around the huts. Some of the families were offering handicrafts and souvenirs; I spent the rest of my time chatting and photographing the kids. 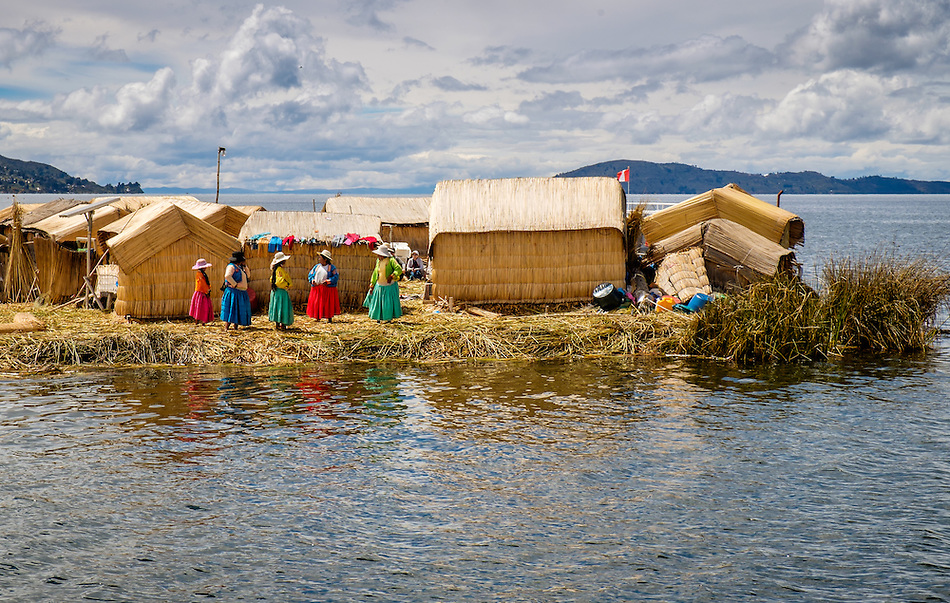 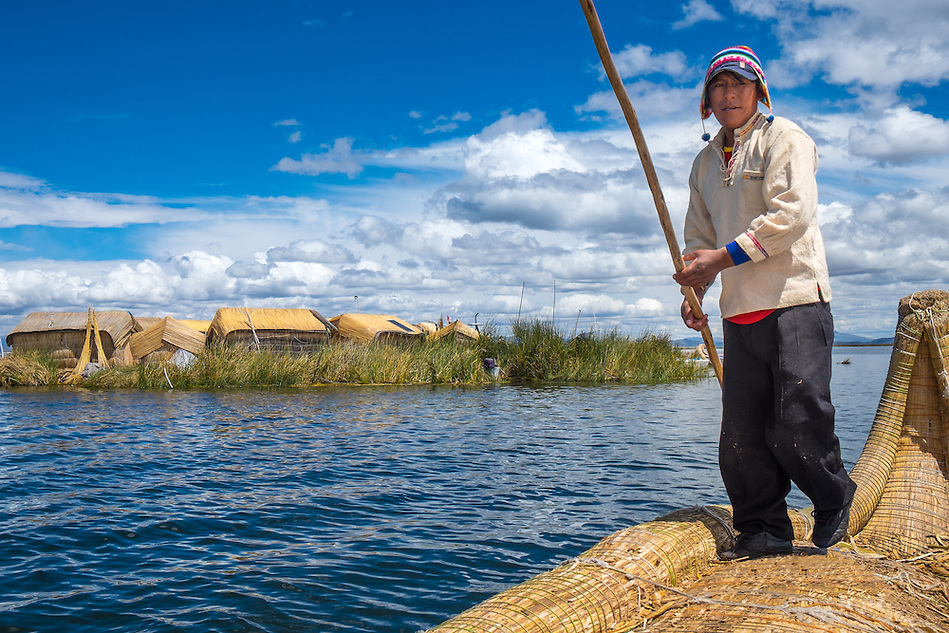 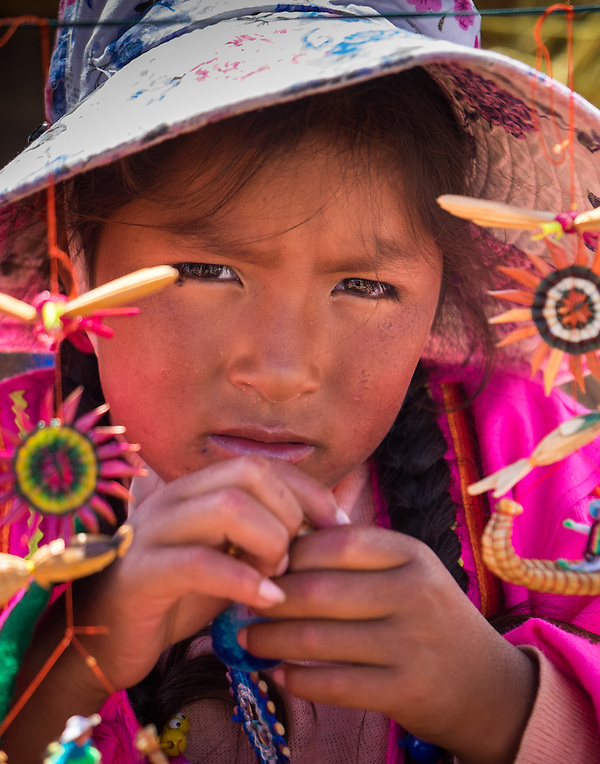 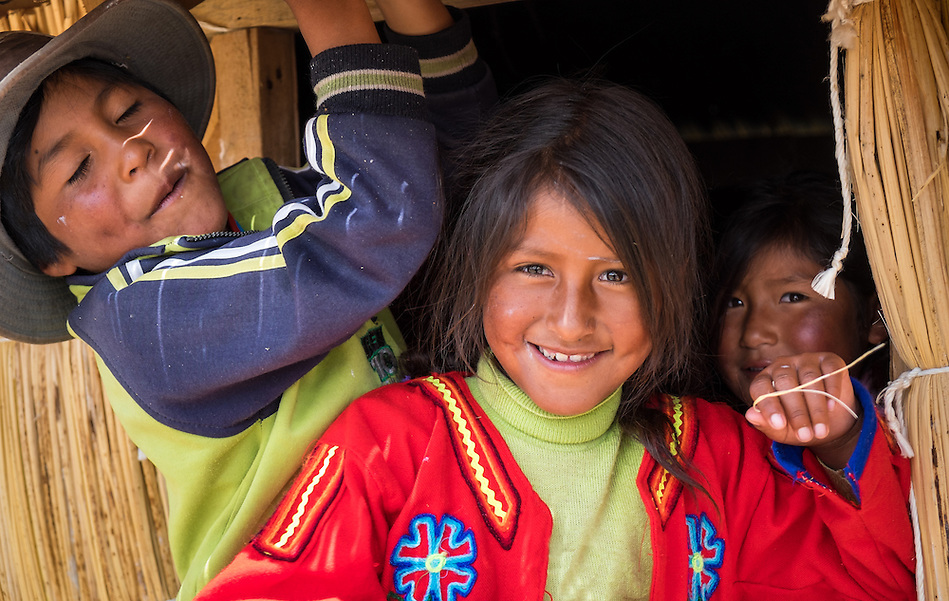 The next destination was the island of Amantani, where I was going to spend the night. There are no hotels here, nor running water or electricity, but the reward is a home stay with one of the local families. This is rather a small island, with two mountain peaks, Pachatata (“Father Earth” and Pachamama (“Mother Earth”).

It was around 2 p.m. when our group arrived at Amantani, and we were split up and assigned to different families. The adobe houses are scattered on the hillside. Still hurting from the attitude sickness, I climbed slowly and observed the terraces, most of them worked by hand. The views were stunning.

Our host showed me my bedroom and then she prepared an abundant meal. The quinoa and potato soup was delicious; it was followed by a plate of rice. After lunch, some of the people in the group hiked to one of the peaks; unfortunately, I knew I was not going to make it, so I hung around the house. It was not bad after all, as I had the chance to play around with the little ones and take some interesting photos.

I walked to the main plaza and waited there for the group to return from the hike. Along the way I found a small shop that sold snacks, candies and some basic products.

The accommodations were basic, but cozy. Contrary to the daytime warmth, it was really cold at night. Luckily, many blankets were provided. 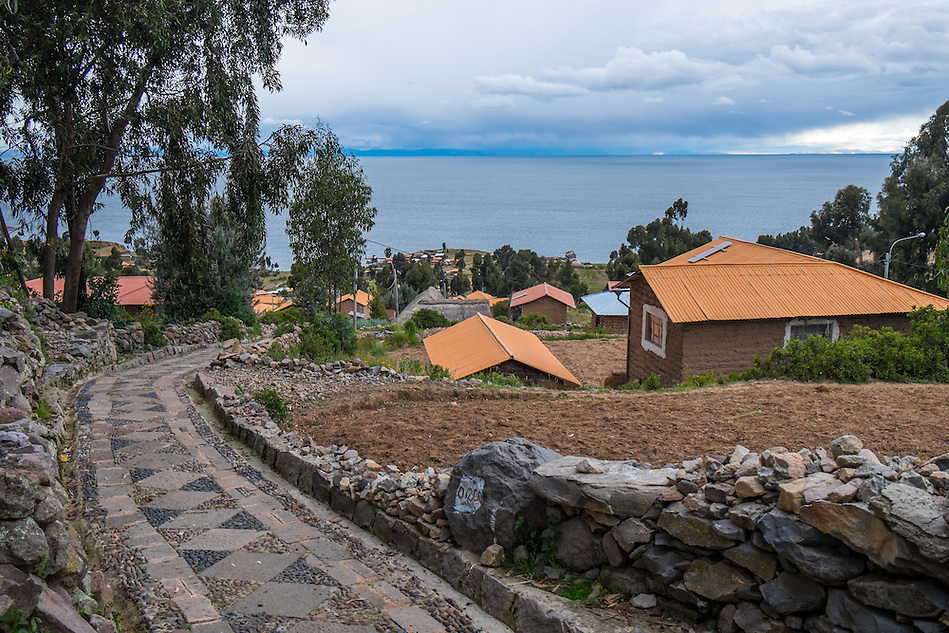 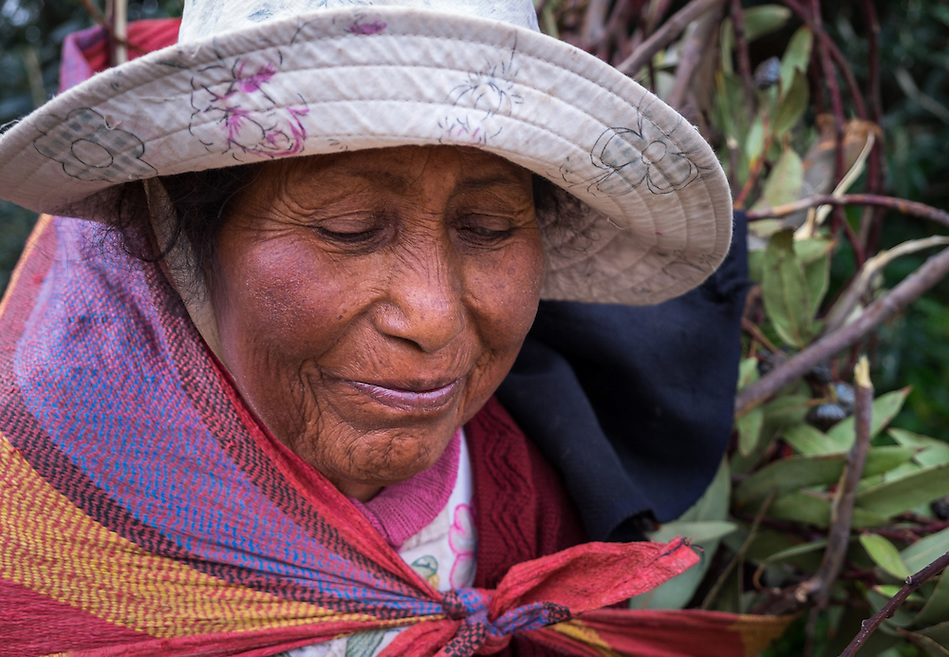 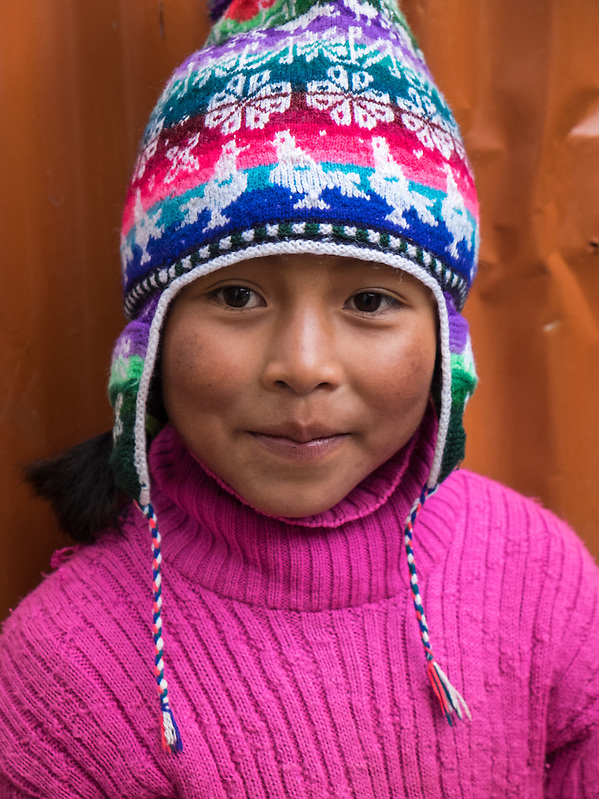 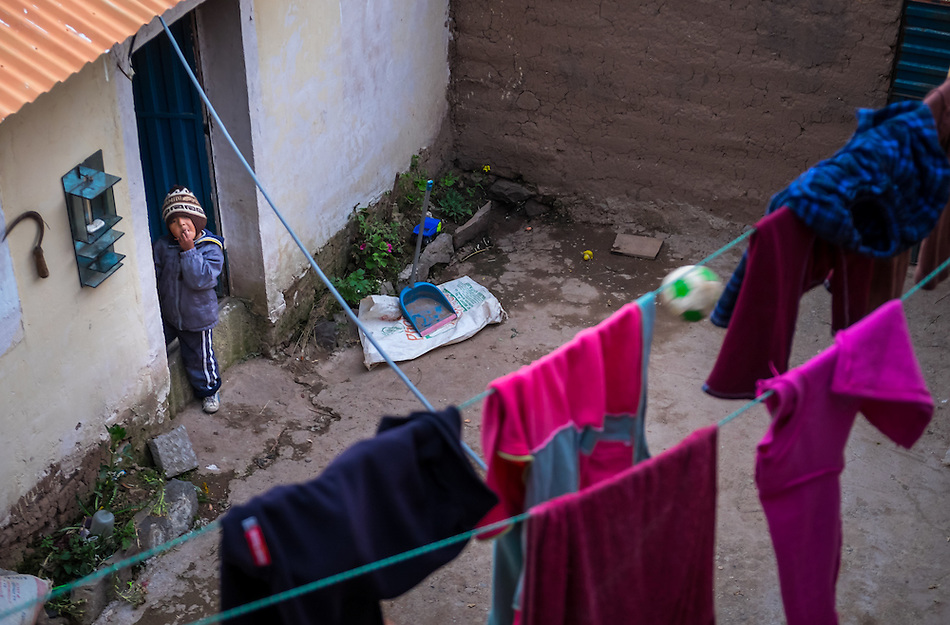 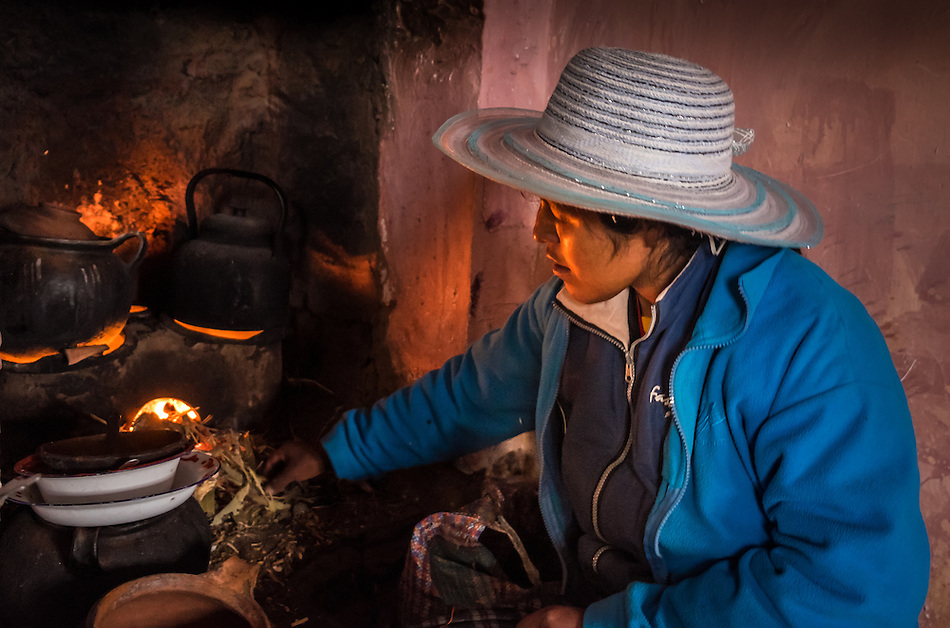 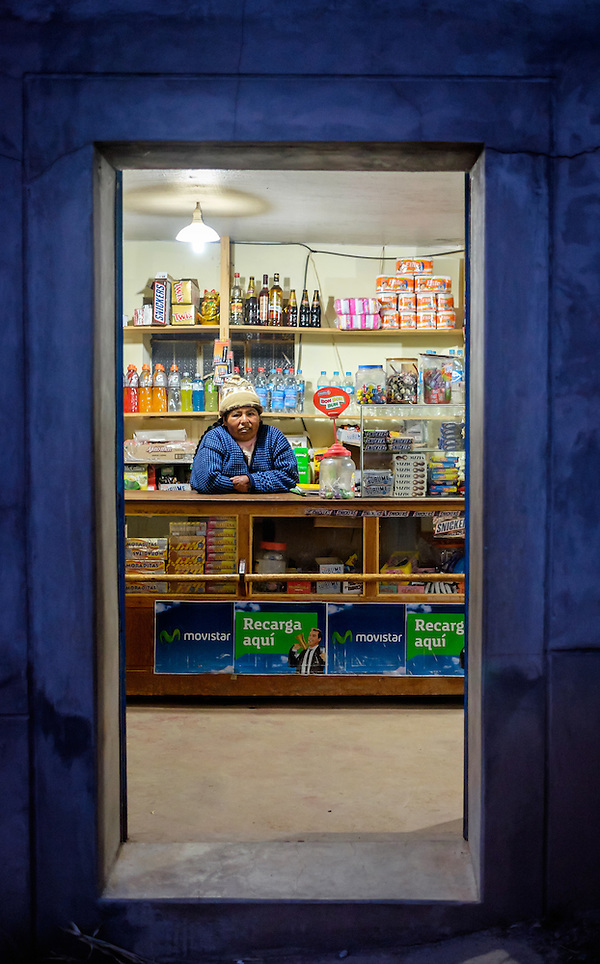 The following morning I was treated with a breakfast feast. I was feeling much better and ready for the last stop before returning to Puno.

Our host accompanied us back to the dock where some of the local women were gathering, dressed in colorful skirts and black embroidered shawls. We departed, waving hands. It was the beginning of another wonderful day; this time the lake was choppy, but an hour later, we were reaching the northern dock of Taquile.

This island is smaller than Amantani, and its inhabitants, the Taquileños, are known for their great handwoven textiles and particular clothing. In fact, UNESCO honored this community by proclaiming their art as “Masterpieces of the Oral and Intangible Heritage of Humanity.”

There are plenty of hills in Taquile and the only way to get around is to hike via the small trails throughout the tiered terraces. The place is popular for its landscapes: the vistas of the green, cultivated fields in juxtaposition with the intense blue of the lake and the background of the mountains are breathtaking. I came across locals around the path and gazed at typical houses scattered along the hills. I was having a blast and I couldn’t stop taking photos. Up top was the main plaza and I was the last one to arrive.

There is a community restaurant and also the place where you can buy textiles around the main square, but also a concentration of typical houses and alleyways around it. At times, it felt like the watch stopped there a long time ago.

The community is run and based in collectivism, under an Inca moral code: “Do not steal, don’t lie, don’t be lazy.” Their economy is based on farming, fishing and tourist-generated income.

We stopped for lunch in one of the houses on the hillside overlooking Lake Titicaca; it was a delicious meal of vegetable soup, fresh fish with rice, and a cup of tea. We stayed here quite a while, enjoying the food and contemplating the natural backdrop. Nobody wanted to stand up but it was time to walk down to the main dock; this one sits on a different side of the island and from here we returned to Puno, adoring one more time the warm breeze and colors of Lake Titicaca. 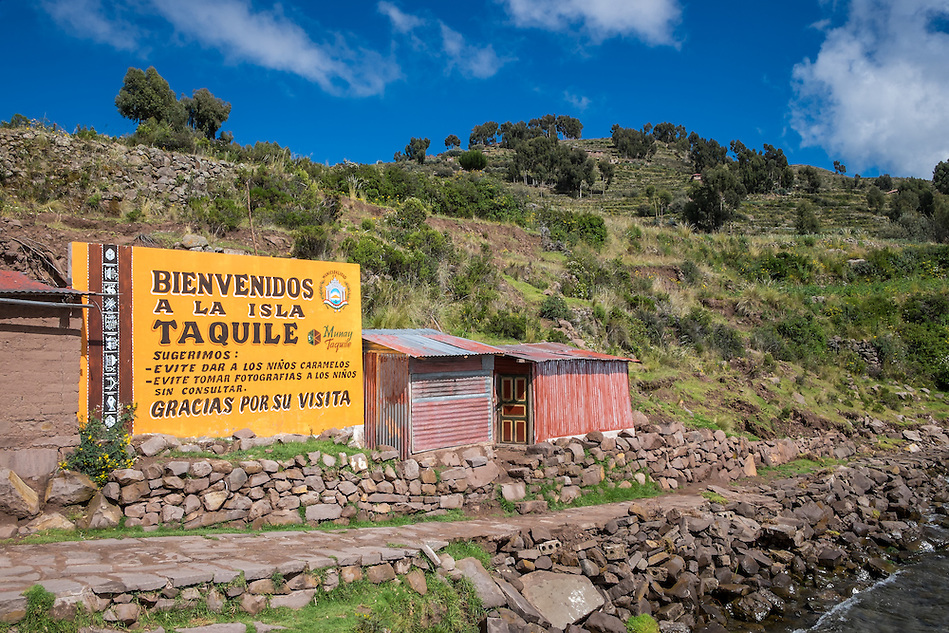 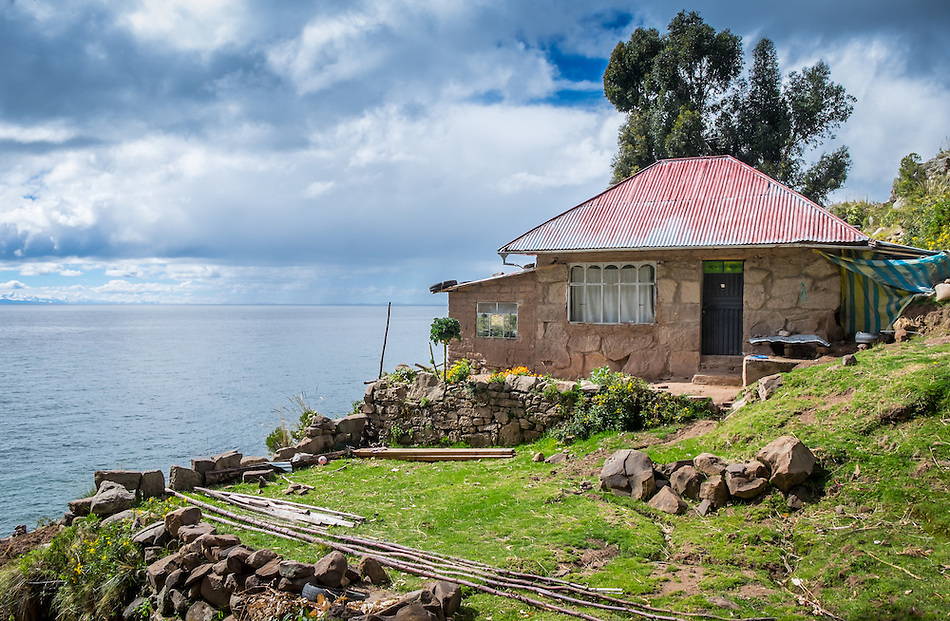 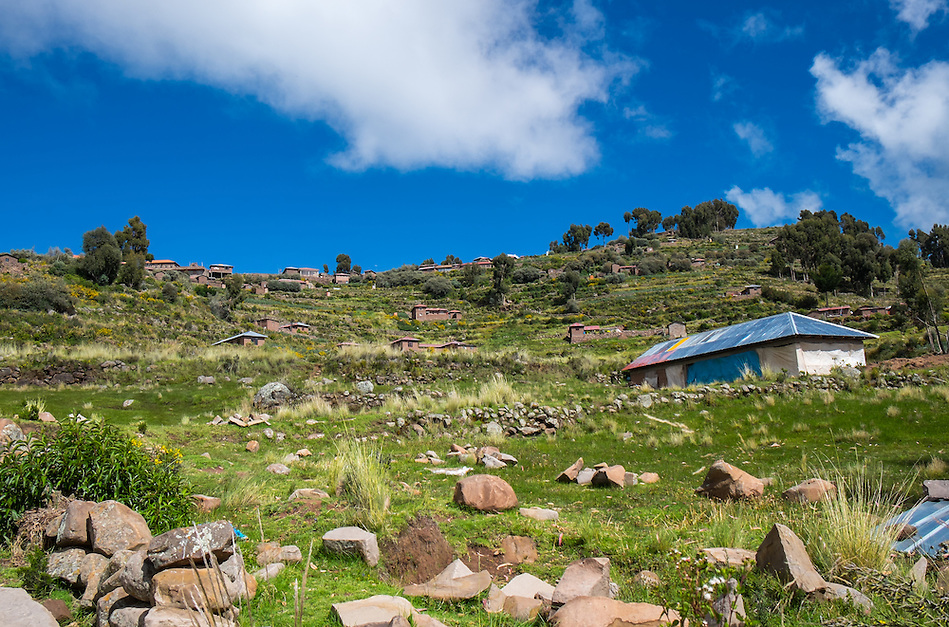 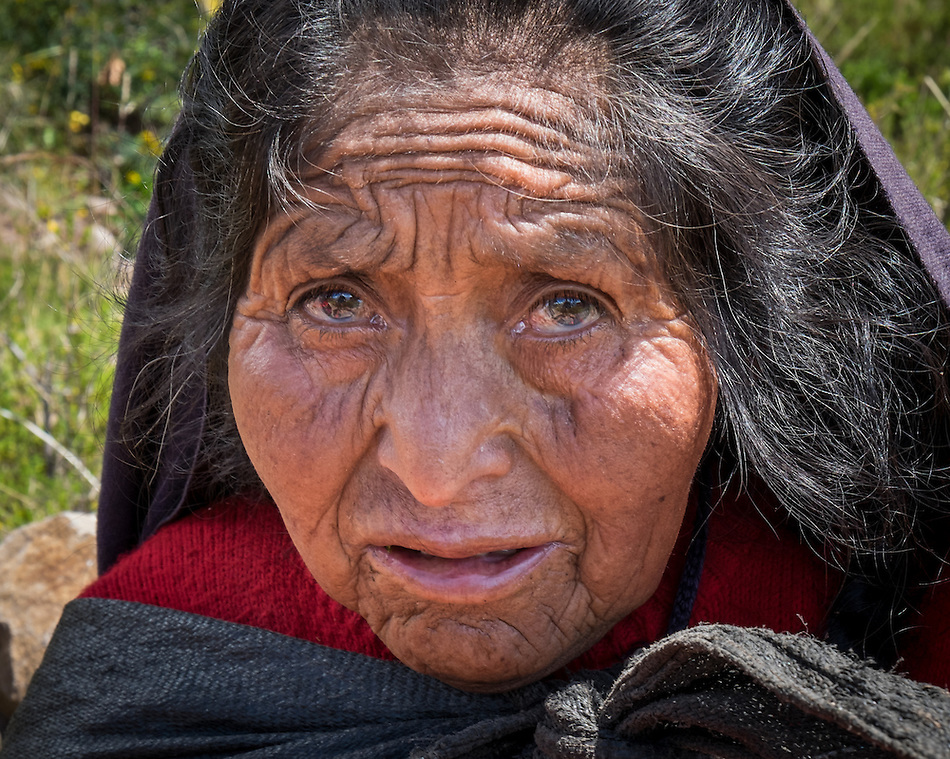 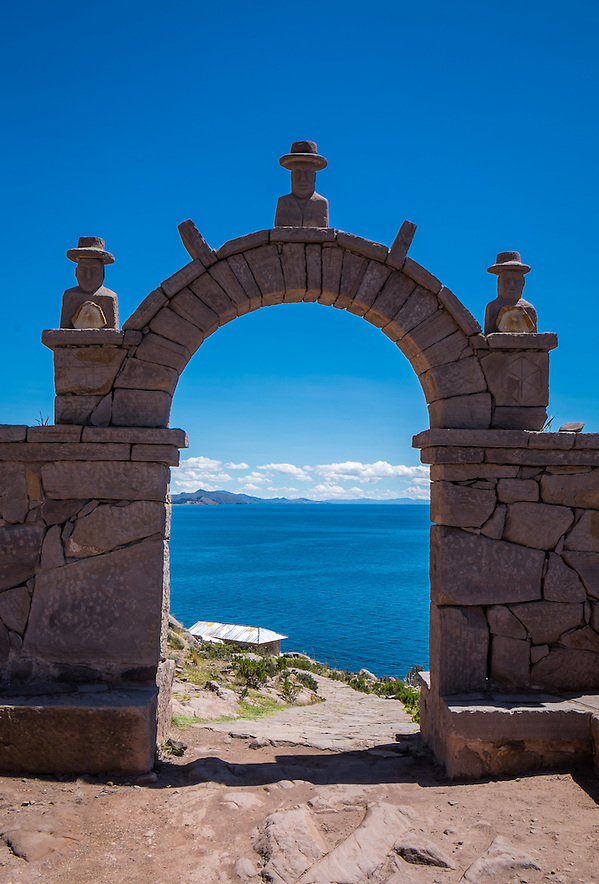 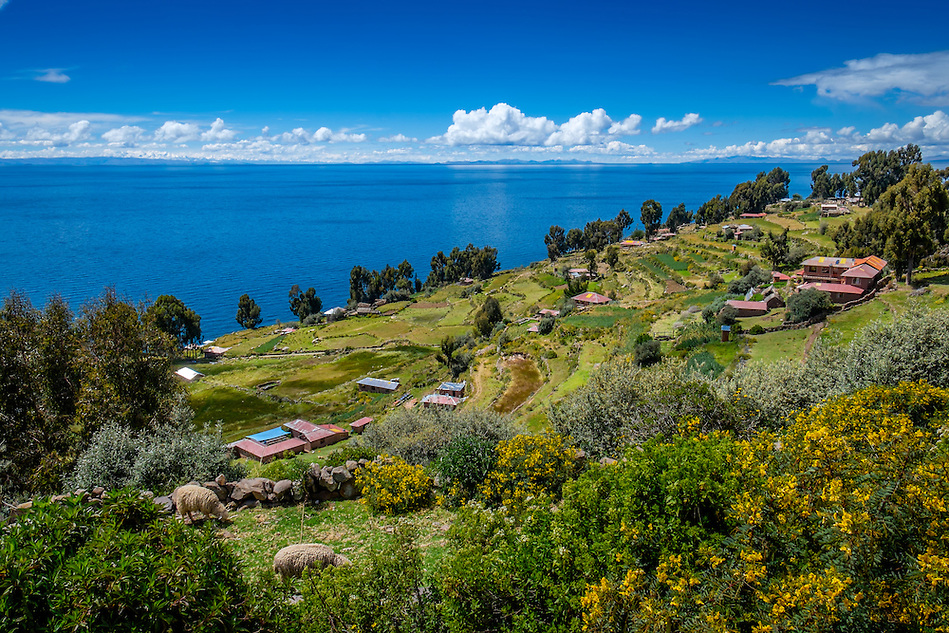 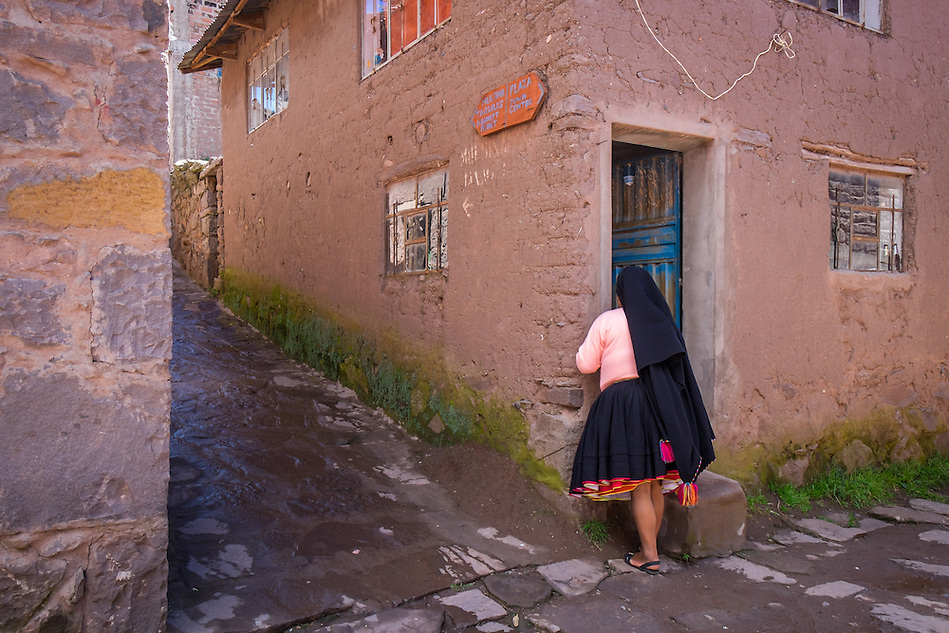 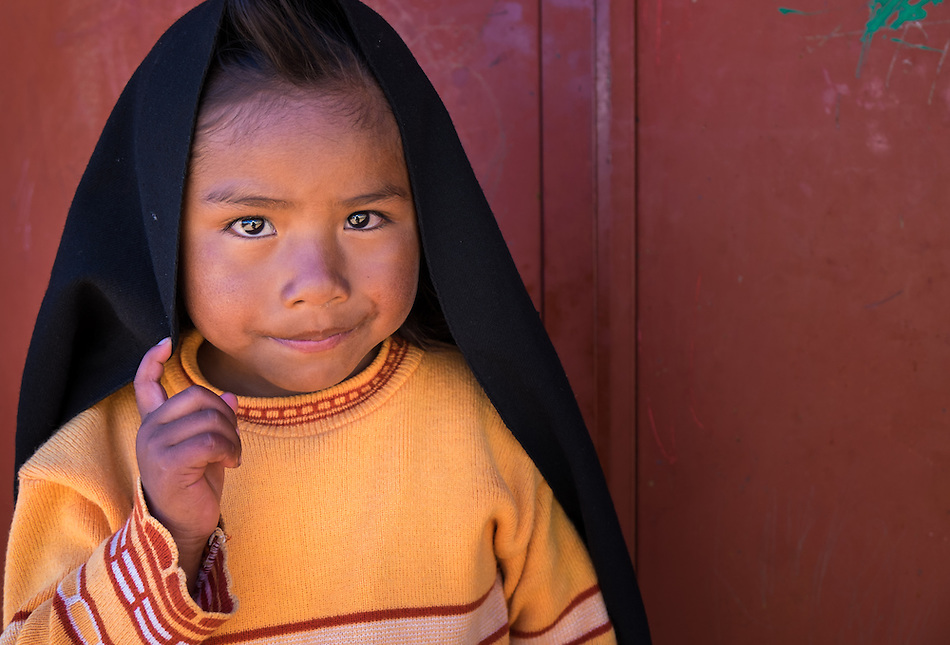 This was truly a remarkable weekend. I enjoyed the experience and appreciated the opportunity of getting to know just a little more about local traditions and culture. I’d certainly love to come back on a longer trip to Peru and stay in this area again.

I was thankful for my Fuji X kit during this weekend. Walking around almost breathless was troublesome enough; I can’t even imagine myself carrying a backpack with the Nikon and lenses under these conditions. I can’t stress enough how these Fuji cameras are a game-changer for the travel photographer; I am a really glad I made the jump.

That’s all for now, more coming soon… if you want to travel with me, please check out my two upcoming photo tours and adventures to Bhutan and Vietnam/Cambodia.