You are here: Home / Travel / Morocco / Casablanca to Chefchaouen via Rabat | Photos

It was a long day of touring from Casablanca; the route was curvy, passing Rabat, some small villages, and some mountainscapes.  Our guide announced that we would make a 15-minute stop in a scenic spot.

We went down, crossed the road, and there she was, perched beneath the Rif mountains, surrounded by high peaks: the blue pearl had emerged almost magically in front of us. We were in Chefchaouen, also known as just Chaouen for short and this was the second spot on the Morocco Photo Tour I am leading along with Darlene Hildebrant of Digital Photo Mentor.

We stood there, taking it all in and making photos of the beautiful view as the afternoon wheeled out. 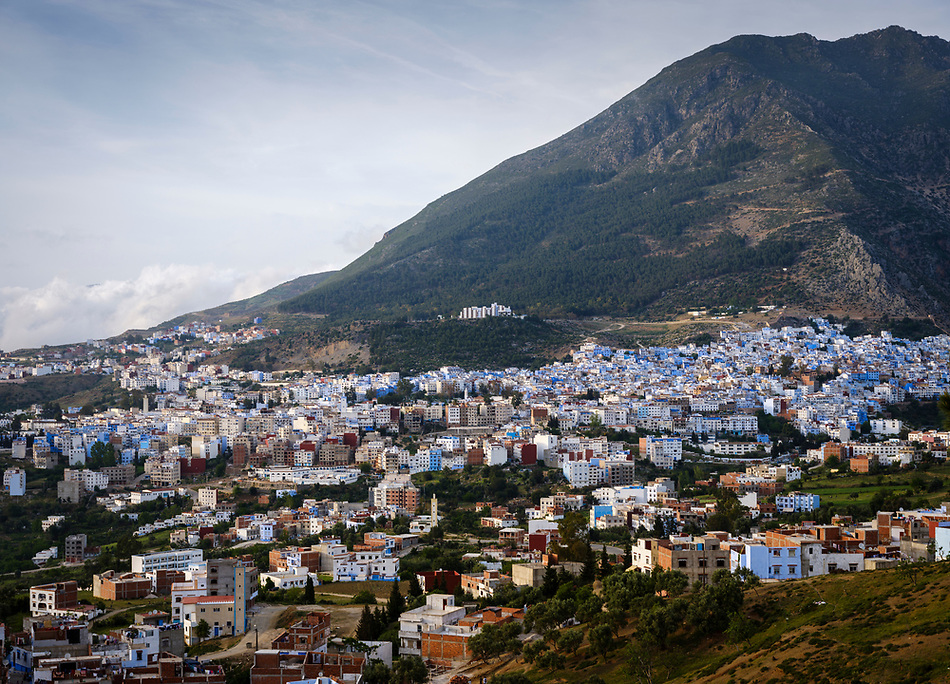 Chefchaouen has plenty of narratives and fascinating places, but there is a good reason why it’s called “the blue pearl”: the artsy mountain village is fully rinsed with a pale blue color that covers not only most of the houses but also the mosques, squares, and even the street lamps. Let’s throw into the mix an old medina, narrow pedestrian lanes, and you have a place with enough character that pleases the eye and can make even a seasoned travel photographer smile while wandering through it.

This town is often overlooked and excluded from the traditional photo tour trail of Morocco, but I am glad that Darlene included it in ours.

It was here that I learned what the concept of a Riad was for the first time. It is basically a traditional Moroccan house or a palace with an interior garden or courtyard. They are all over Morocco, and many of them have been restored, converted into hotels, homestays or restaurants. Staying in places like this is perfect to get a more cultural immersion of the country, and of course, it’s neat to photograph them. 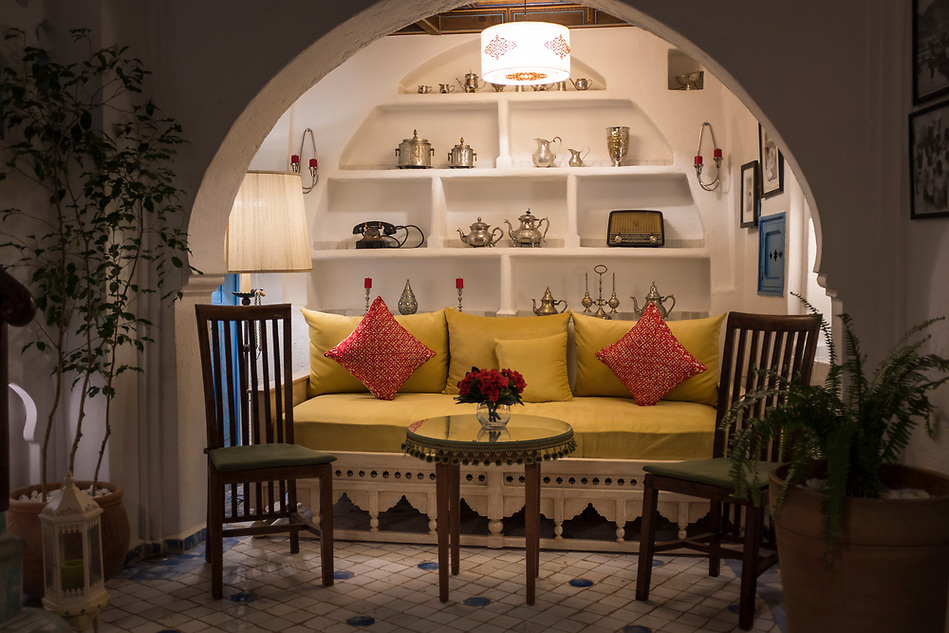 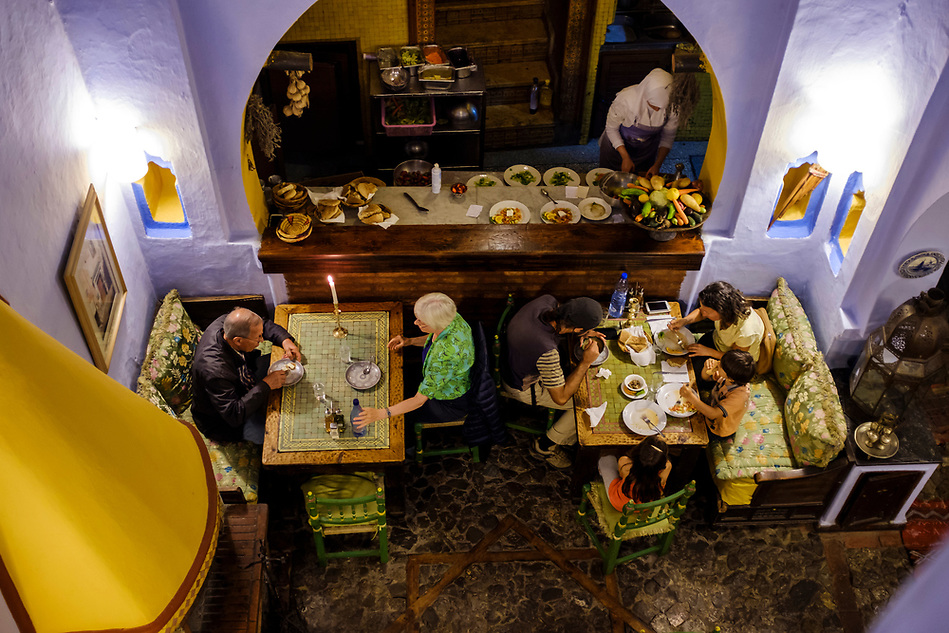 Chaouen was founded by Jews and Moors in 1471. Some people say it was painted blue by the Jews that fled Hitler and settled here. But I also heard from one of the guides that the color keeps the mosquitoes away, and some others simply said it represents the color of the ocean. But I know for a fact that the blue-washed colors suit it perfectly; unmistakably it is now one of the characteristics that make the village stand out.

It was indeed a fabulous experience to wander around and photograph the town of Chefchaouen and some of the locals. I particularly enjoyed walking early in the morning before breakfast and at night after dinner. For me, quiet streets are better; in situations like this, I can take photos when tourists are sleeping. It allows me to work slowly and not feel rushed. Some people from our group followed me, to this “out of the program outings” and they enjoyed them too. 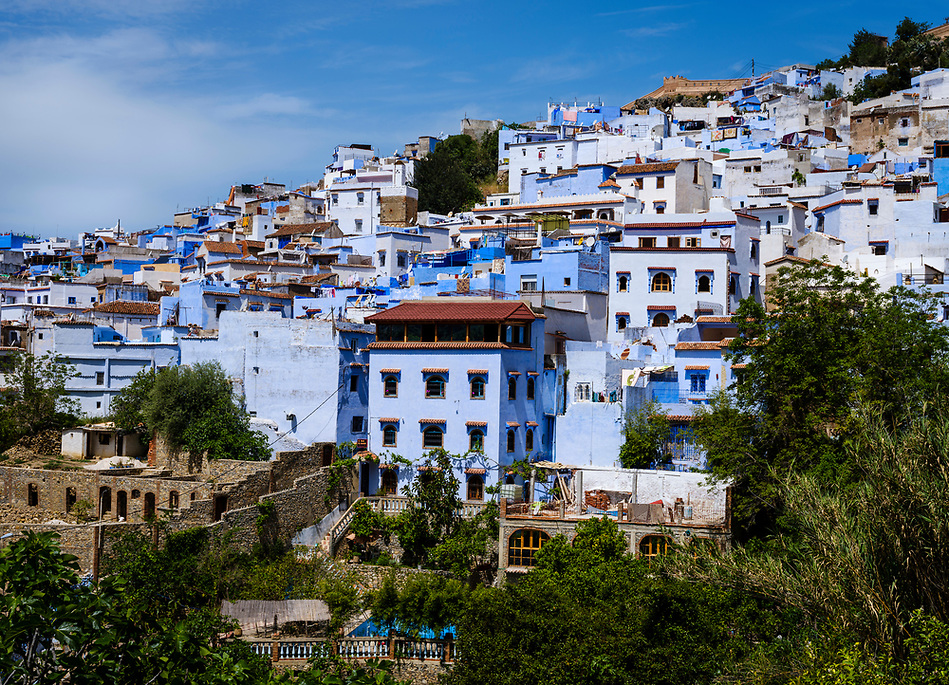 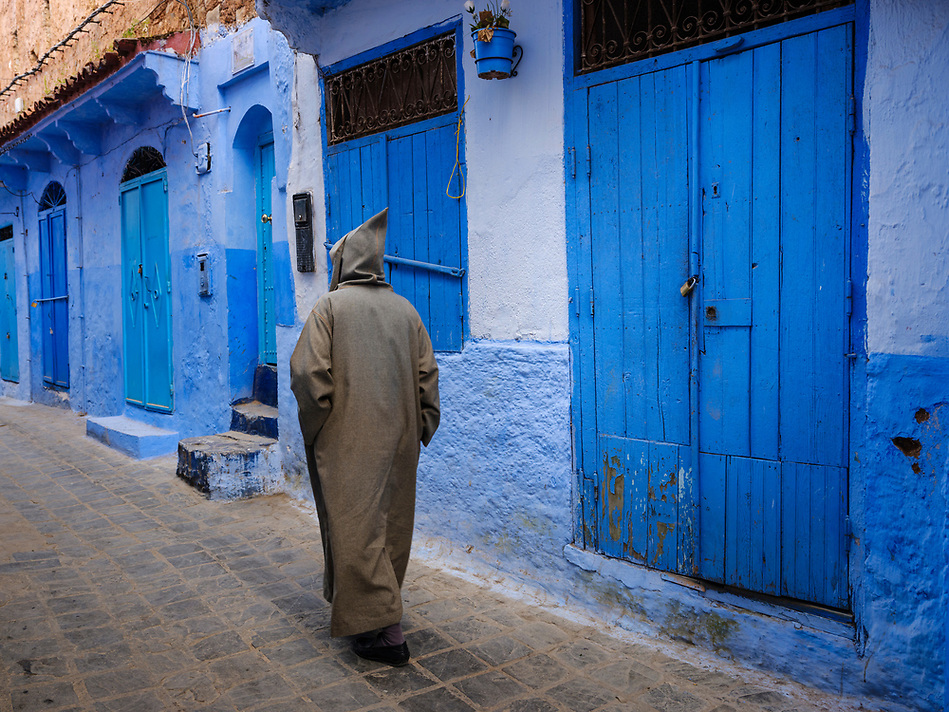 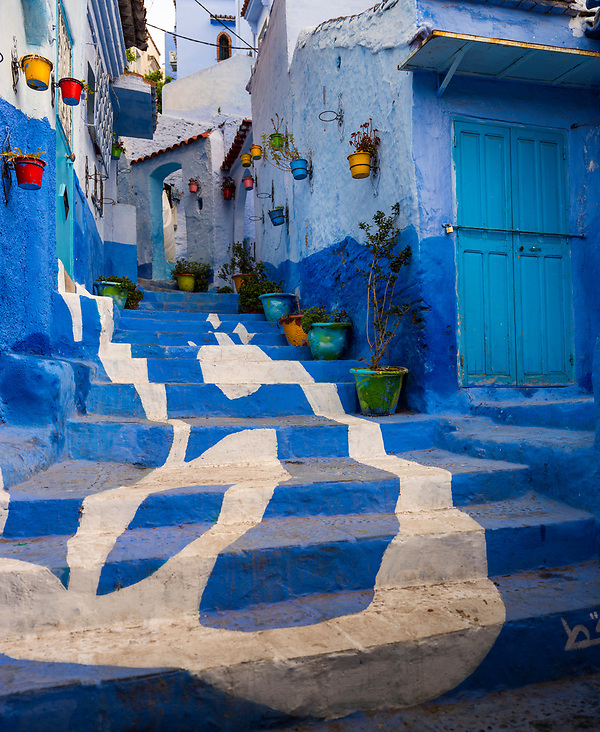 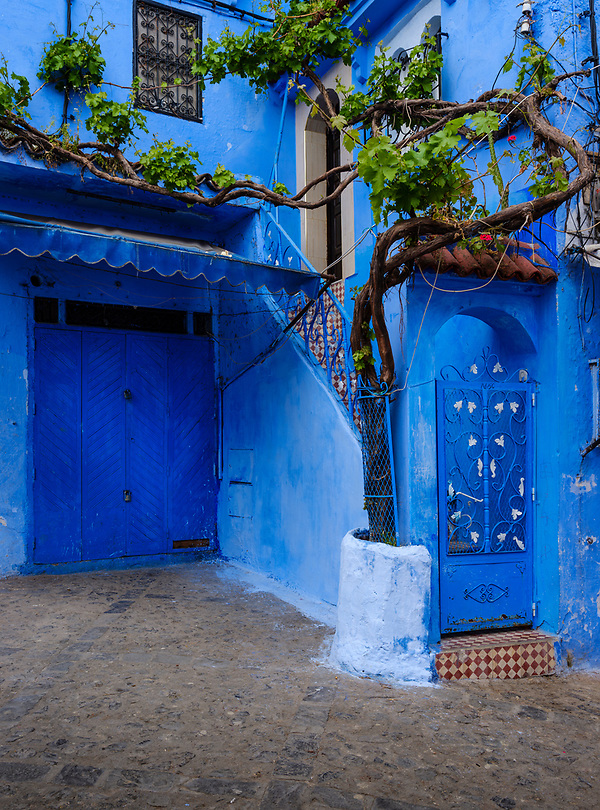 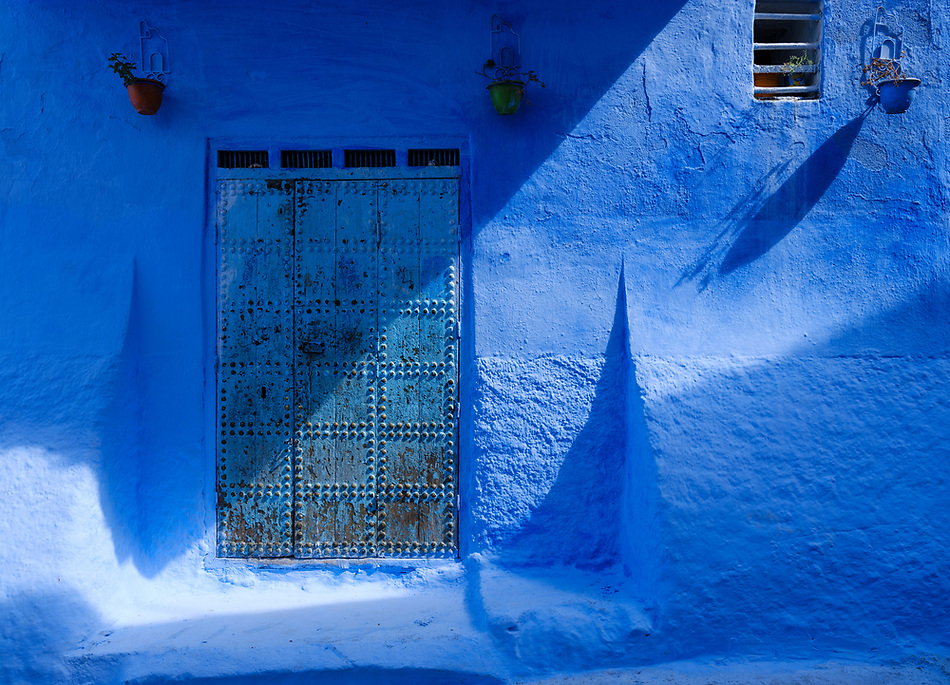 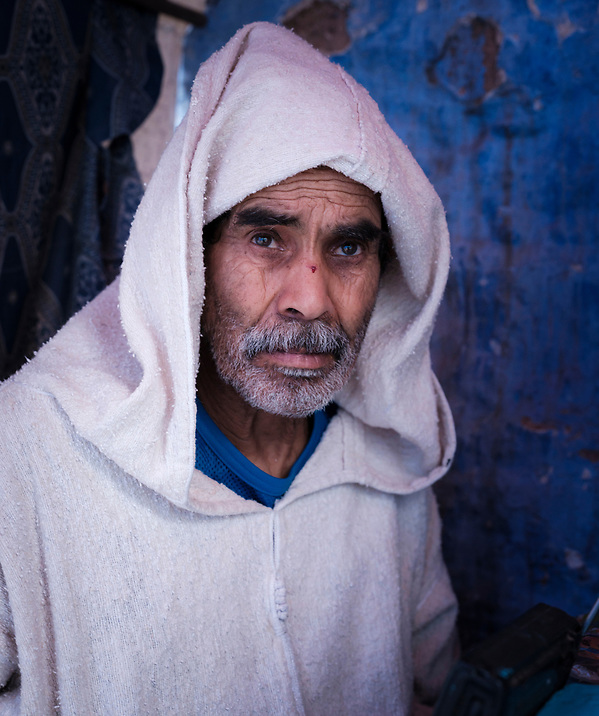 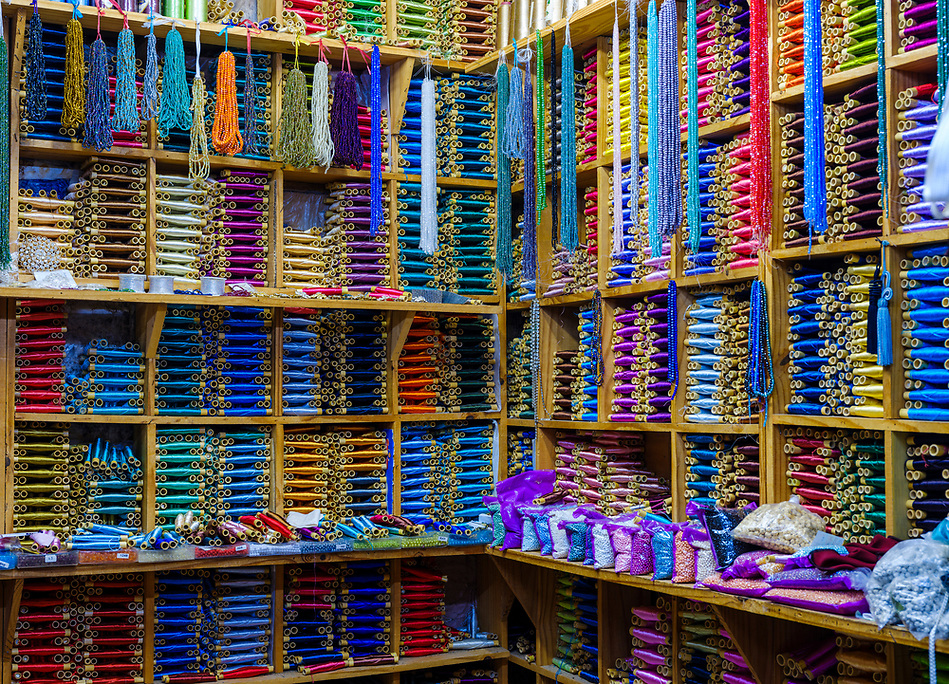 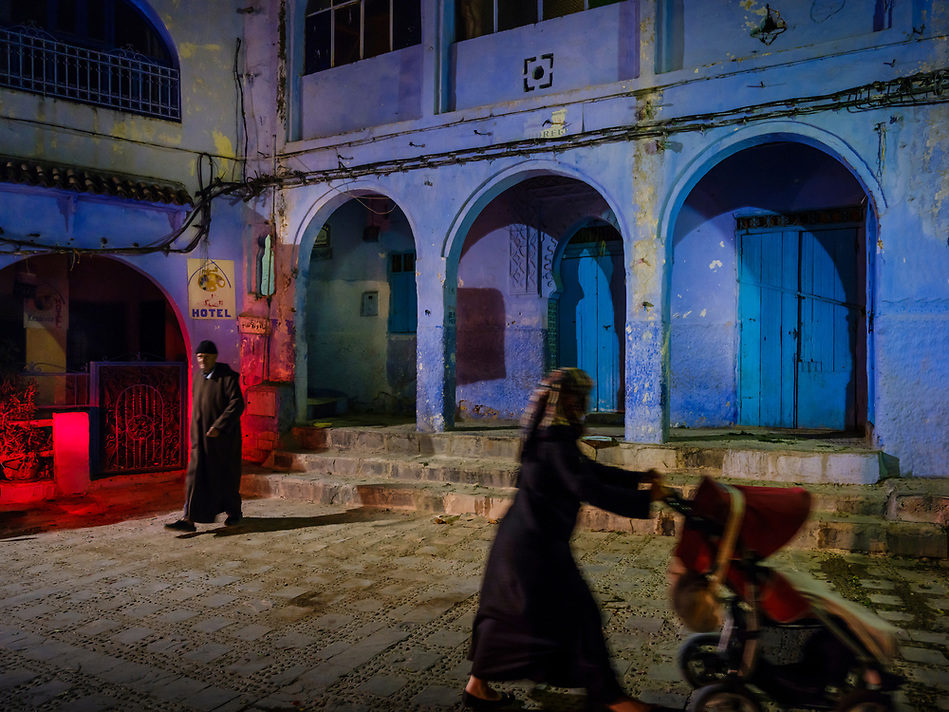 Besides the village itself, on a 45-minute moderate hike, a trail leads to the Spanish Mosque. It sits on a hilltop and is mostly ruins, but the highlight here is the view. In some parts, the path is steep, but the outlook is totally worth it. We climbed there for sunset but stayed until past blue hour, taking photos of the village below.

I think that blue hour is the best time of the day to photograph cityscapes. Needless to say, blue hour over the blue city – wow, that’s cheesy but who cares – was fun and enjoyable. 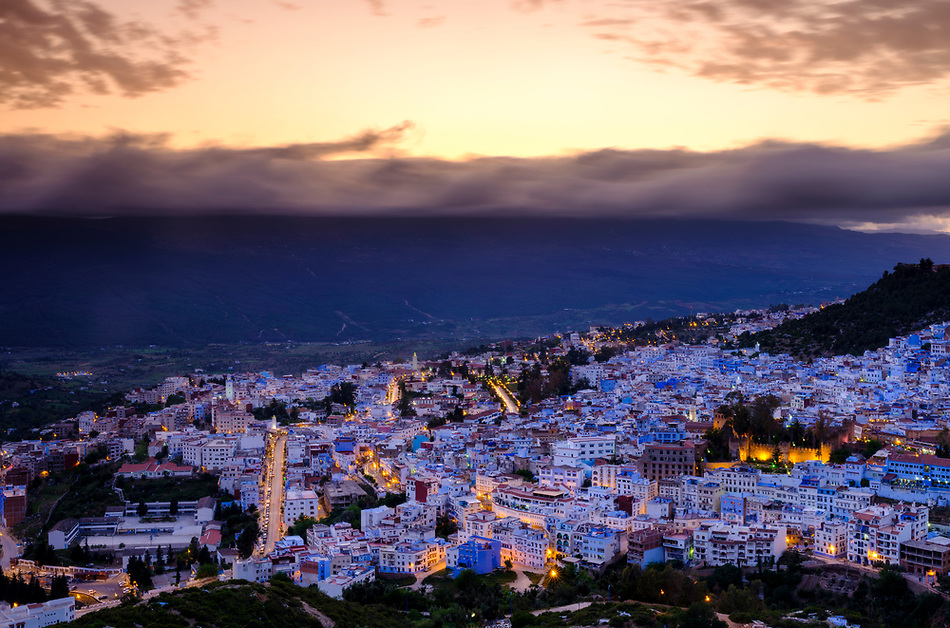 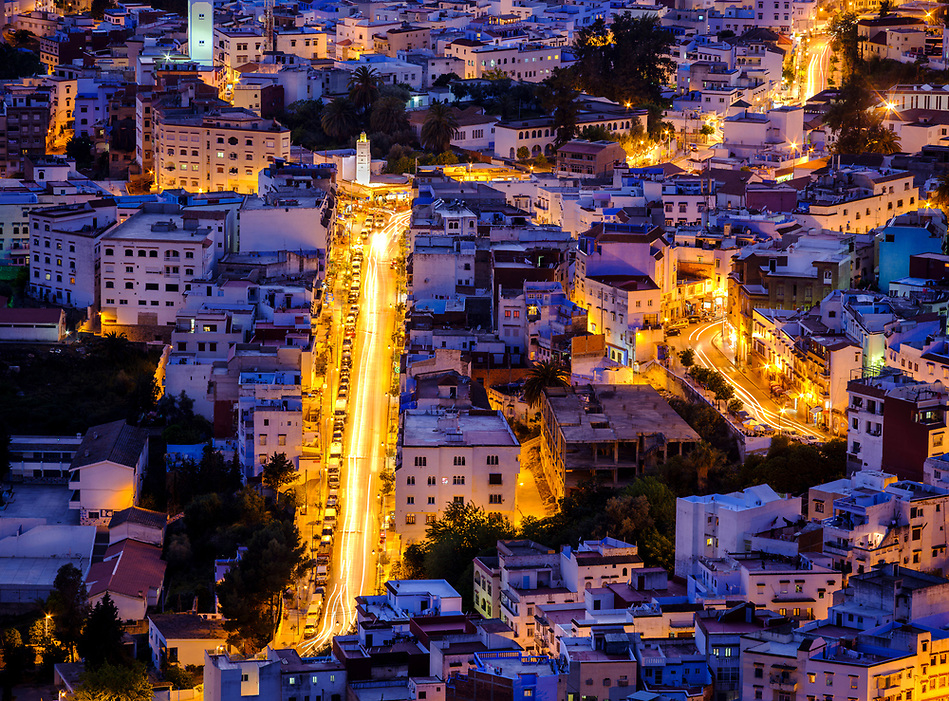 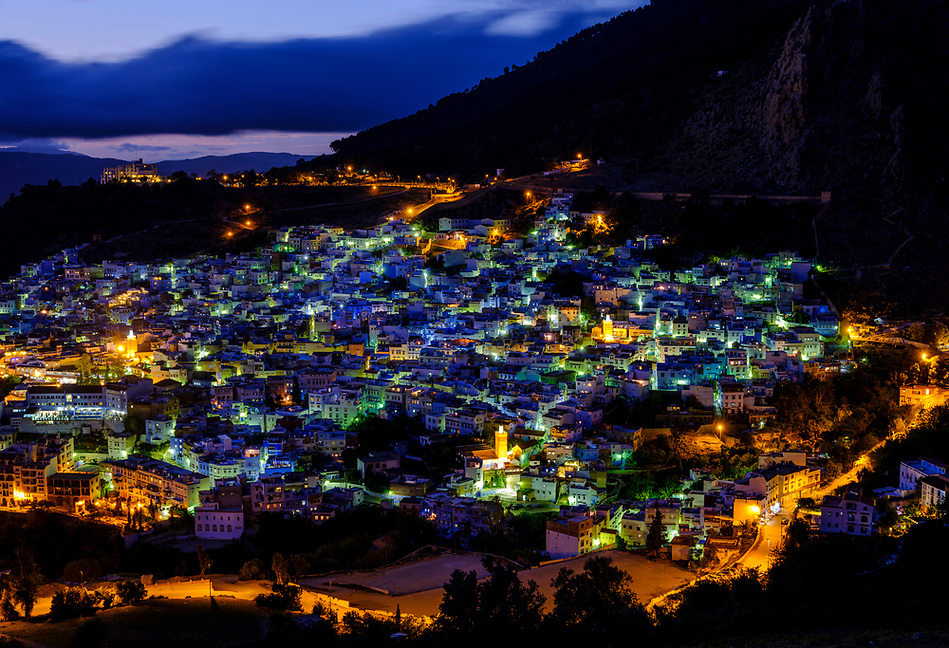 I’ll be back next year to Morocco,  subscribe to my list and get first-hand notice of upcoming tours and new destinations I am working on.

Most of the photos from the post were taken with the Fuji GFX50s and some with the X-100F. All the photos from Chefcahouen are available for prints and licensing, just click on them for more information and pricing.